Jann, who I spoke to on the phone yesterday, is living in Hyderabad for one year with her husband and ten year old daughter, Natasha.  She is a friend of Mrs. Rao’s (who’s mother in law founded SRH. Dr. H. is the boss, but she’s sort of the executive, if you will).  Jann helped raised some money for medications, and wanted to drop off the donation and visit the HIV kids.  She brought with her two friends from Seattle, Diane and Diane’s nephew Simon.  We met in Dr. H’s office.

Jann is a lovely, fit, middle-aged, cosmopolitan woman.  She looks a little bit like Francis McDormand (you know, Margie from Fargo).  She has a master’s in public health, and lived in Cambodia for a little while in addition to traveling all over the world!  She’s really good with people–doctors, leprosy patients, children, American post-graduate students.

Diane is Jann’s close friend from Seattle, and she is a smaller woman with brown hair.  Diane loves children, and they gravitate towards her.  She is gentle and friendly, and has a kind smile.  Simon, her nephew, is younger, in his early 30s or so, with fair skin, a long sharp nose and curly dark hair, like a Greek statue.  All three people were very warm and interested in the work going on here. I was really really happy to spend the afternoon with them.

The four of us went on a walking tour of the compound. I was so excited to show them around, and speak in full, unadulterated sentences.   In the past two weeks I’ve eliminated most adjectives, adverbs and almost all the prepositions from my speaking repertoire.  I’ve been down to monosyllabic nouns, and simple declarative subject-verb sentences (I go. Lunch, eat, 12:30. Thank you.) You can’t imagine how much I’ve missed conversing in English (well, yeah, you probably can).  Jann had visited Sivananda before, but this was Diane and Simon’s first time.  We saw the HIV clinic, the outpatient clinic, leprosy, guest house 1, and ended up at the children’s home.

Simon brought a storybook to read the children, and was very captivating with his animal voices and animated expressions.  He is a trained actor who studied in California, and brought a book for the children about an artist titled “That’s How I see Things.”  In the story the artist paints pictures of imaginary animals like a pig with peacock feathers, or a lion with blue bird wings.  When the story was over, Simon passed out sheets of paper and markers and we all drew our own animal creations.

The markers were a big hit, and the kids were very enthusiastic.  I was really impressed with the children’s artistic skills.  Some of them drew the animals from the story, but others were quite inventive.  Its funny, in America if you give a child some markers and ask him or her to draw an animal, they often come up with cats and dogs, maybe a rabbit for good measure.  Give child in India the same, and he or she will produce an elephant, tiger or peacock.  Sometimes a cobra.

I drew a tiger with butterfly wings and a penguin wearing ballet shoes, just for fun. 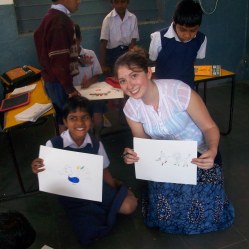 When it was all over, Jann and I traded cell numbers and she suggested we go out to dinner sometime.  Diane and Simon are leaving for the states (tomorrow actually) but Jann will be here for as long as I am.  I have lots of amazing friends here at SRH, but getting to know Jann was a great comfort.  She shares my America/India perspective, and she is an amazing role model and she reminds me of my friends back home.

I have been so blessed in my stay in India thus far to meet such amazing people.  Being away from everyone and everything really helps me put the value of kindness into perspective.  From doctors who take me under their wing, to kitchen staff who make my food less spicy (Sunita calls it “chili, zero-zero”) to fellow Americans who reach out to me– I have been treated with unparalleled hospitality and warmth.  It reminds me of the passage in Matthew’s Gospel, “I was a stranger in a foreign land, and you welcomed me.”  I never really understood its importance until now.